Some of these stories have been included in Spirit Fruit: Collected Speculative Fiction by Carole McDonnell 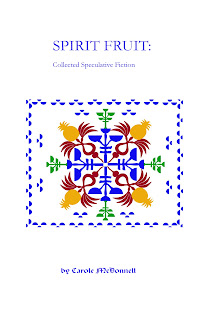 The Gleaners -- in Black Faery anthology

Changeling -- in Griots edited by Milton Davis and Charles Saunders 2011

A Cry For Hire – Fantastic Stories of the Imagination, edited by Warren Lapine (Not included in this anthology)

Some of my stories in anthologies are:

My SF story, "Lingua Franca" is included in an anthology So Long Been Dreaming: Post-colonialism in science fiction," edited by Nalo Hopkinson and published by Arsenal Pulp Press;
Lingua Franca is a spec-fic story about a planet where for environmental reasons people have evolved without the faculty of hearing. A federation from the earth arrives and changes their culture by bringing in implants. The story is told from the POV of a mother who loses her young daughter to the new ways.
http://www.arsenalpulp.com/select_book.php?book=176

My fantasy story "Black is the color of my true love's hair" is in the "Fantastic Visions III" anthology published by Fantasist Enterprises;

"Black is the color of my true love's hair," is about a crusader returning from the wars to his home and to his beloved wife in Christian Ireland. On his journey, he is accompanied by a beautiful spirit while he endures temptations that shows Christendom is as full of sin as any non-Christian place. Full of beautiful courtly dialog. It's written like an old fairytale -- Boccaccio/Lord Dunsany/ etc. That is definitely heartwarming and spiritual with lots of religious imagery. ...if I do say so myself. It's available at Fantasist Enterprises
http://anthologies.fantasistent.com/

"Jigsaw Nation" published by Spyre Books" My story, "Homecoming at the Borderlands Cafe," is about a young couple who live in a state that doesn't mind their interracial marriage. However when they have a baby and the powers that be realize the baby will be taught the Bible, the authorities threaten to take away their child. They flee to a state that accepts their religion. However, in that state, communities are divided by race.
http://www.ekaterinasedia.com/JigsawNation.html