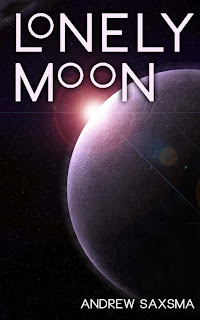 Book Summary : Earth lies in ruins, destroyed by an unknown enemy. Humanity flees their burning homeworld, seeking a safe place to hide before they can be hunted down and eradicated. Alliance Captain Michael Hane watches helplessly while his wife and unborn child fall victim to the random slaughter of Earth. With time running out, he is burdened by the last bits of humanity to find a way to stop this menace before it wipes the galaxy clean of every last human being.

Almost on cue, Nilus entered the bridge where Hane sat in the pilot’s chair, the only other one on the bridge.


Hane turned and looked over the back of the chair as Nilus walked futher in.


“This one had a feeling it would come up sooner or later,” Nilus said, his huge oily eyes staring at Hane.  His eyelids blinked with a wet slosh.


“What is the Hades Station,” Hane asked, point blank.  “And I don’t want any run around, Councilor.”


“Very well.  The Hades Station watches and monitors the Hades FTL Bridge at all times.  During my species’ first ventures into space, in the early days of the Faster Than Light Bridge networks, a group of Aurans were charged with exploring the galaxy, creating pathways for which to travel throughout the network.  The very pathways our species use every day.  These explorers were known as the Pioneers,” Nilus said, typing on his chrome bracer.  A small panel opened and a hologram projected from his bracer into the air.  A spherical representation of the Milky Way galaxy slowly rotated in the air above both of them.


“That is correct.  The basic idea is to set a point of origin,” Nilus said, pressing a button on his bracer.  A bright dot on one side of the galaxy hologram flashed and remained solid.  “Then, the Pioneer uses a ship to trace the route for which the Bridge will take.  Once it reaches its intended destination, it drops a Bridge Gate with which to connect back to the point of origin.  While the Pioneer ships can still travel faster than light with warp technology, it is quite dangerous.  These ships are more or less flying blind, guided by telescopes from our homeworld.  They are unreliable, and most ended in tragedy.  But the cause was too great to quit.


This one’s species set the tone for other inhabitants of the galaxy to flourish within.”


“What does any of this have to do with the Hades Bridge?”


“One Pioneer travelled too far.  Farther than anyone has ever been in the history of our galaxy,” Nilus said.


“Where did he end up?” Hane asked.  He rose from his chair, interested.


“The Andromeda Galaxy,” Nilus said.  He pushed a button on his bracer and a line traced from the solid dot, across the hologram.  The line shot out of the hologram and into the air, stopping a foot outside of the sphere.  “From start to finish, the trip took roughly fifteen thousand years.


Upon arrival, the destination Bridge Gate was released and went online,” Nilus said.


“So?  What’s wrong with that?” Hane asked, missing the point.


“An Auran’s life-span is only about three hundred and fifty years.  The oldest Auran recorded was four hundred and thirty-three.”


“The Pioneer died before arriving at his destination,” Nilus said.


“As a precaution, every Pioneer must enter a code to finalize the connection between the point of origin and its final destination, thus establishing a successful network,” Nilus said, shutting down the hologram.  “Until three years ago, there were one hundred trillion, five-hundred thousand, and sixty-seven invalid code entries.”


“Someone was trying to finalize the connection?” Hane asked in awe.


“What do you mean by three years ago?  They stopped?” Hane asked.


“One correct code was entered,” Nilus said, gravely.  “Something came through.”

Andrew is a small town author, surrounded by cornfields on all sides in a quaint little mid-western bore.
His style is eclectic and to the point, with some polished flowery imagery for flavoring. His ideas are sharp and grisly and mostly deal with the fringes of reality, the things you hear on dark stormy nights, the things with no names. If the world of Literature was a full-bodied woman, his writing would be the hosiery, tight and fitting.
Genre: Horror, Supernatural, Thrillers, Suspense
Influences: H.P. Lovecraft, Stephen King, Brian Keene, Gregory Thompson, Richard Laymon.
Link to Book or Author Website : http://www.andrewsaxsma.webs.com , http://andrewsaxsma.blogspot.com

Posted by Carole McDonnell at 5:51 AM