Humble is the Way by David Jones 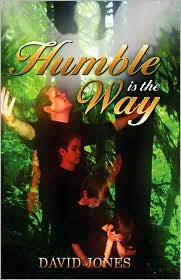 Humble is the Way
by David Jones
Publisher: McDougal & Associates
Pub. Date: July 2007
ISBN-13: 9780977705368
208pp
I usually just post the info about a book but I've decided that maybe -- I won't promise this, mind you-- I'll just give a little intro before I go on to post the book info. Last week I had a near run-in with my husband's boss. He's an okay person but let's just say that my husband has been the longest-employed guy at this firm. Because, well, the boss is a tough one. So I called hubby's office and the boss has this weird rule that if an employee gets a non-business-related call from family or friends -- and if the phone isn't picked up by said employee-- that the phoner should hang up the phone after the third ring. (yes, the guy is a bit on the anal side.) So I always follow this rule. But on this particular day I kinda faded out into a daydream while I waited for hubby to pick up the phone. When my mind returned to me, I realized the phone had rung about seven times. The secretary picks up the phone and says to me, "The boss said to remind you to not let the phone ring more than three times." I was so peeved with this jerk. I felt the holy spirit say to me, "you have got to learn to deal with folks who use authority badly. You have got to learn to be humble no matter how badly you are treated or no matter how cruel or stupid you think someone is." I realized, of course, that this was the same exact situation I had been in before...with asholey neighbor down the road. I hung up the phone. I wanted to call my husband later and tell him to quit this job (my husband is a super-asset in this company.) but then I thought, "Let's not think of ourselves more highly than we ought to think. Do something out of anger and God might not watch your back." I wanted to tell this boss off and say, "Excuse me! Everyone who works for you has left you. You are not exactly liked. Do you know why?" But I didn't. It took a whole lotta strength. I can't say, though, that I won this battle of humility. I'm still pretty strongwilled and arrogant. Immediately after the secretary gave me that message from the boss, I called back the office and made the phone ring four times. Just to be a pain. I wanted to make it ring seven times. To really nag this guy. But I held back. Yes, yes, I know. Childish. My neighbor got a good laugh at it. Remember, she's the one who saw me being dragged off to the police station because I got pissed off at menacing gun-toting neighbor. I think that those of us who have been abused and treated really shabbily by family, racists, etc...tend to have a chip on our shoulder. But as Canon Jim Glennon has said, "The devil of resentment is that it's justified." I find myself getting very short-tempered with Christians sometimes. I still haven't forgotten how cruel they have been to me. (Imagine being in a great deal of pain about one's son's illness and some minister who is supposed to be praying for you saying that black folks shouldn't be married to white folks.) I suspect that the reason many black christians have had nothing to do with the church is because of white racism and the slave trade. But what if the power of God cannot be manifested if we aren't humble? Here it is on Barnes and Noble Here is the blurb:

Humble Is the Way: The way to what? The way to God's favor, the way to form and then maintain a relationship with Him and, as surprising as it may seem, the way to maintain our human relationships as well. Humility is not just required before God; it is also required before one another. Because of this, humility is one of the most needed characteristics and virtues in the Body of Christ today. The Bible clearly shows us that humility is indispensable in the Christian life. "The fear of the Lord is the instruction of wisdom; and before honor is humility" (Proverbs 15:33). Jesus Himself demonstrated the greatest degree of humility in His earthly life and ministry, and in so doing, He set a pattern for us. The result was this: "God highly exalted him," (Philippians 2:9). So humble is where we must begin, and humble is where we must remain. In these pages, Pastor David Jones masterfully lays out, in the simplest of terms, what terrible consequences pride will bring and what glorious rewards humility will bring, and, best of all, he shows us what is required for each of us to walk humbly before God.

Posted by Carole McDonnell at 11:33 AM