I AM A STEAMFUNKATEER!: Why – and how – I write Steamfunk

At first, I had no great love for steampunk. It seemed stuck in Victorian England, and as another writer has written, "It's a genre based around fashion." I generally don't hang around where i'm not wanted.

Of course that is a bit of an exaggeration. But you know what I mean. Not to mention the whole business about lords and ladies, corsets, women of easy virtue and highwaymen.  Sure, there are all these pocket watches, corsets, waistcoats, top hats and laced boots. But there was also steam. The genre's one saving grace -- or the central core of the genre.

You can do a lot with steam without having to ponder the whole Victorian wink-wink upperclass issues of pervy shopgirls etc, eugenic Darwinism (as in Time Machine), and the British Empire.  And really, if the basic definition of steampunk is a world where technology is driven by steam and pipes, I can explore and understand it.

It's the nature of Black folks to create so African-Americans have spent much of our creativity learning to adapt the art styles of the larger cultures we find ourselves in.

I DO like some steampunk. Philip Reeve's world for instance. But I still want to see more Black, Latino, Native American and Asian folks in steampunk. I am generally not Afro-centric in my writing. I tend to be very multiculti, loving Asian and other cultures as well as the many cultures of the African Diaspora. Isn't a Korean sajeuk or a Japanese samurai period piece another form of Sword and Sorcery?  I also love certain genres and often wish to write in those other genres as well. I like the purity of fairytales. I especially love pure romance. But one rarely sees a Steampunk novel that is multicultural and romantic AND a fairytale....which speak to modern Black or non-white readers.

So -- for the steamfunk anthology edited by Milton Davis and Balogun Ojatede, I figured, why not extend steamfunk to Korean Joseon times? So I did. What would life be like if a Black princess and a Korean prince were forced to get married back in the day? If we are to be honest about racial issues, and add an acknowledgment of racism to romantic fairytales...and if we are to add fantasy to the mix....well.... anything's possible. My story is in the Steamfunk Anthology.

For the next Steamfunk anthology, I'll stick closer to home and I might not use the fairytale genre. However I'll keep to the multicultural pattern. A love story about an escaped Black female slave and a Native American youth who helps her escape her owners and the slave bounty hunters. Steamfunk evolves!!!!!! 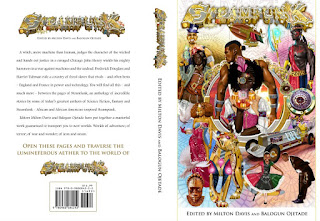 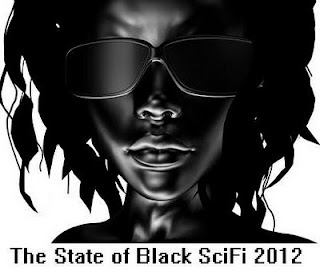 Please visit the sites of other steamfunk writers:

Milton Davis – Milton Davis is owner/publisher of MVmedia, LLC . As an author he specializes in science fiction and fantasy and is the author of Meji Book One, Meji Book Two and Changa’s Safari. Visit him: www.mvmediaatl.com  andwww.wagadu.ning.com .

Ray Dean – Growing up in Hawaii, Ray Dean had the opportunity to enjoy nearly every culture under the sun. The Steamfunk Anthology was an inspiration she couldn't pass up. Ray can be reached at http://www.raydean.net/.

Malon Edwards – Born and raised on the South Side of Chicago, Malon Edwards now lives in the Greater Toronto Area. Much of his speculative fiction features people of color and is set in his hometown. Malon can be reached at eastofmars.blogspot.com.

Valjeanne Jeffers – is an editor and the author of the SF/fantasy novels: Immortal, Immortal II: The Time of Legend and Immortal III: Stealer of Souls. Her fourth and fifth novels: Immortal IV: Collision of Worlds and The Switch: Clockwork will be released this spring. Visit her at: http://valjeanne.wordpress.com  and http://qandvaffordableediting.blogspot.com/ .

Rebecca M. Kyle – With a birthday on Friday 13, it's only natural that the author is fascinated with myths, legends, and oddities of all kinds. Ms. Kyle lives with her husband, four cats, and more rocks and books than she cares to count between the Smokies and Cumberland mountains. Visit her at http://bexboox13.blogspot.com/.

Carole McDonnell – is a writer of Christian, supernatural, and ethnic stories. Her writings appear in various anthologies, including So Long Been Dreaming: Postcolonialism in Science Fiction, edited by Nalo Hopkinson; Jigsaw Nation; and Life Spices from Seasoned Sistahs: Writings by Mature Women of Color among others. Her reviews appear in print and at various online sites. Her novels are the Christian speculative fiction, Wind Follower, and The Constant Tower. Her Bible study is called: Seeds of Bible Study.   Her website is http://carolemcdonnell.blogspot.com/.

Balogun Ojetade – Author of the bestselling “Afrikan Martial Arts: Discovering the Warrior Within” (non-fiction), “Moses: The Chronicles of Harriet Tubman” (Steamfunk); “Once Upon A Time in Afrika” (Sword and Soul); “Redeemer” (Urban Fantasy) and the film, “A Single Link” and “Rite of Passage”. Finally, he is Co-Author of “Ki-Khanga: The Anthology” and Co-Editor of “Steamfunk!” Visit him: http://chroniclesofharriet.com/.

Hannibal Tabu – is a writer, a storyteller, and by god, a fan. He has written the novels, “The Crown: Ascenscion” and “Faraway” and the upcoming scifi political thriller “Rogue Nation”. He is currently the co-owner and editor-in-chief of Black geek website Komplicated at the Good Men Project, and uses his Operative Network website (www.operative.net) to publish his poetry, market what he's doing, rant at the world and emit strangled cries for help.

Geoffrey Thorne – Geoffrey Thorne has written a lot of stuff in a lot of venues and will be writing more in more. It's his distinct pleasure to take part in another of these groundbreaking anthologies. Thanks for letting me roll with you folks. For more (and God knows why you'd want more) check out http://www.geoffreythorne.com/.

Posted by Carole McDonnell at 2:03 PM