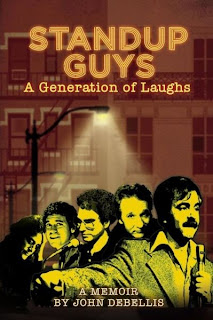 "My story acts as a through line that puts you in the middle of those golden days of stand-up comedy, with guys like Larry David, Richard Lewis, Gilbert Gottfried, Rita Rudner, Richard Belzer, Paul Reiser, Bill Maher and on and on.   I think it's a fun, informative read, something that regular people as well as aspiring comics would enjoy.  I'm not trying to pat myself on the back but I really do believe that every young comic would benefit from reading this because it's our history as comedians. There's a great book calledThe Last Laugh about comedians in the late 50's and early 60's (the original version) that we all read.   It gave you a feeling of being back there.  I wanted to do the same thing, except from a comic's point of view, and hopefully I succeeded." John Debellis
Link to Book or Author Website : http://920spot.com/
Here's an excerpt:


Symptoms of a Super Hypochondriac
One night, after Larry David and I both had bad shows, we went back to his apartment to give each other a comic pep talk, which consisted of who could feel less doomed by finding the most fault with the audience and who had the worst spot.  After about an hour of competitive complaining, as I was about to leave, I noticed on the floor next to LD’s bed, several pamphlets—Symptoms of Cancer, Symptoms of Heart Attacks, Symptoms of Strokes, Symptoms of Legionnaire’s Disease and several other life threatening illnesses.
Later that week I was telling Lenny Maxwell what I’d found.  We all knew Larry was a hypochondriac but this had raised him to the level of a Super Hypo.  Coincidentally, Lenny was given a book on the theory of type A and B personalities and their correlation to heart attacks. On the inside cover, pretending to be the author, Lenny wrote an inscription that said he had seen Larry’s set at the Improvisation, and it was obvious that Larry was both type A and type B, and that he should seek medical attention immediately—he was a ticking time bomb.  We mailed the book to LD.
A few nights later Lenny and I were sitting at the Improv bar when the door burst open—stumbling out of the glow from the street light, like the God of anxiety, was Larry.  His anglo-afro looked like magnetized corkscrews pointing straight out of his head.  His face was white enough to get him in a clan meeting without the sheet; his eyes red, like he’d try to rub the color out of them.  Larry ran up to us, holding the book, his hands unable to contain the tremor, practically stuttering,  “Uh… I got this book in the mail.”  His unsteady fingers poked at the page Lenny had written.  “The doctor saw my act.  I’m going to have a heart attack!”  He looked like he was about to have a massive coronary, which made it difficult for Lenny and I to contain our laughter.  He kept circling, his open hand covering his face like a mask, breathing in out heavily and quickly, almost gasping for air. “What should I do?  I’m going to have a heart attack! Should I go to the emergency room?  I’m going to die!”
Lenny, with a straight face, calmly said, “Larry, the doctor who wrote that book is an expert in his field and certainly knows what he’s talking about.”
“Maybe, there’s a medication? What am I going to do? I have a set, I could die in the middle of my act!”  LD’s anxiety was getting dangerously close to causing cardiac arrest.  Although the thought of Larry dying on stage, and falling to the ground blaming the audience for his demise was hysterical, we had to spill the beans before he actually had a heart attack.  Between Larry’s erratic breathing, Lenny managed to shout that we had sent him the book and wrote the inscription.  As Lenny’s words sunk in Larry stopped, flinched his head a few times and just stared, I suppose, not knowing whether to be relieved, angry or embarrassed.  Finally, he just burst out laughing. A grin streaked across his face—color returned to his eyes.  He composed himself and said, “Uh… Very funny.”  We had no idea of what LD really felt, all I know is he took that book home and I would have bet it found place on the floor atop his medical pamphlets.
Years later Larry accompanied me to visit my grandfather at the hospital.  He walked down the halls holding his hands on both sides of his face, so he couldn’t accidently see inside any of the rooms.  About a half hour after our visit, one where Larry looked like he was about to be bitten by a zombie, I returned home to receive a call from my mother telling me that my grandfather died.  I’m not suggesting that Larry purposely caused my grandfather’s death, but I do think there’s a strong possibility, that after seeing the expression on Larry’s face, my grandfather had lost his will to live. 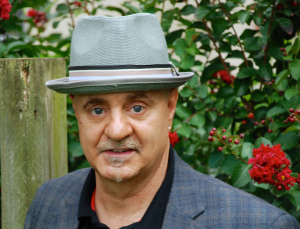 Posted by Carole McDonnell at 6:34 AM