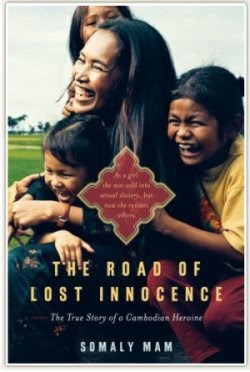 This is the blurb:

Born in Cambodia and orphaned at an early age, Somaly Mam, a Buddhist sex trade survivor, grew up never knowing her real name or birthday.

As a teenager, Somaly Mam was sold into prostitution and spent years in the brothels of Cambodia where she witnessed and experienced the full-blown horrors of the human sex trade – rape, torture, and nearly unfathomable abuse. After her eventual escape, she could not forget the young girls (some as young as 5) left behind in the brothels, and so she returned to serve them. Her new book, "The Road of Lost Innocence," is her newest means of advocacy. It tells her personal story, ultimately inviting people of conscious, such as our Christian community, to become involved (or to continue involvement) in this war against an epic evil, a modern battle for "the least of these." Truly, not only is this book worth reading, it's worth sharing.

I have a review over at Blogcritics. But I'll just give my ruminations of the book here. Reading this book got me thinking about normalcy. Normalcy, like human nature, is often dependent on history, religion, and culture. In Cambodia, it seemed it was normal for poor girls to accept being abandoned, raped, sold to husbands to pay off for debts, and sold by parents or husbands repeatedly. It’s all they know and their society supports this cruelty. It’s also normal, when war begins, for the poor to find themselves sleeping beside dead bodies or amputating the legs of wounded soldiers even if they have no medical knowledge.

Interestingly, the book's synopsis says it's the Buddhist sex trade. But most of Somaly's chief exploiters are Muslim. I hadn’t known that Cambodia had a Muslim population but it seems weird that the publishers should say this. Are they afraid of saying anything anti-Moslem. This doesn’t matter, of course. Slavery in the United States was practiced by so-called Christians. Even so, most Americans are very provincial and do not really understand the world. And I suppose there were many Buddhist men who abused the author. Interestingly, many of us imagine every Buddhist in Asia to be a kind of pure-hearted noble-minded boddhi, geared for truth. It’s apparent from this memory that this is not true. Perhaps all men are naturally like that – would-be rapists who want to attack women. Perhaps that aspect of the male nature is toned down by education, cultural approbration, fear of punishment, and religious indoctrination against extra-marital sexual. Yep, I believe religion protects women. If religious men adhere to it. But perhaps war and poverty only made men nastier. Reading this book one feels that the only thing on men’s mind is the desire to rape…and once they have met a wounded a woman, all they can see is an object they can use and abuse.

I was also affected by the race issue. Always, the love of light-skinnedness and the hatred of darkskinnedness. Everywhere in the world. What is that about?

As I read this book, I felt somewhat vindicated. As a Christian I am often told by some Christian writers that my stories are dark. I often wonder why American Christians don't seem to understand that the world is in a great deal of pain. Not just sin, mind you. The person who sells and buys children for sex is a sinner. But the world is also in pain. The people who are victims of sexual abuse: prostitutes, incest survivors, etc are in need of healing from their pain. Often Christian books are so far from touching painful situations that one ends up with books that cannot reach past the Christian reading community.

This is a book that really reminded me of how lost and confused and evil human nature is without the holy spirit working within.

to purchase the book at Amazon.com:

Some other Tour participants are:

Amazon Link:
Posted by Carole McDonnell at 9:18 AM