So that's where that comes from?

So there I was having a WTF? moment! I realized that my main character in Onion got beaten and had his face slashed and facial structures broken. Just like Loic in Wind Follower. It was so weird.

I thought: uhm, do I have a thing against beautiful men?  I pondered and pondered then let it go. 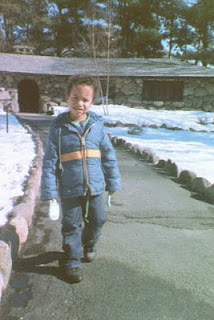 Then I happened to see a pic of my younger son.  This isn't the one -- too lazy to take it from its frame and scan it, besides son is home from school all these many days because of health issues-- but you get the picture. This was before the autism happened.

We were in the car once and a cop said, "What a beautiful little girl!" (Yeah, we didn't have our seatbelts on and the cop got us.)

He had such a beautiful smile.

I realized that my depiction of beautiful faces destroyed by evil forces is probably from some deep place -- deeper than my love for beautiful men, apparently. I was bewailing the destruction of my son's great beauty.

His brother is hot. Gorgeous. I know with every fiber of my being that Mr Gabe would be way more lovely and far more handsome than his older brother. What to do with things as they are?

I was thinking today that when we ask God to restore us, he doesn't restore us to the way we were or even to the way we would've been before the attack -- rape, or illness, or whatever-- assaulted us. He repairs us and uses us as we are. We are repaired and yet not. We are like cracked porcelain. Put together wonderfully, each section reglued. Yet the crack is visible. The other cracked people can recognize us. Uncracked people can recognize us. God shines through the cracks but we are not quite healed. We go into heaven maimed.

i would like my son to be utterly repaired, utterly restored. Okay, if God wants, God can give son a bit of a lisp maybe...to show the world that son was once cracked and once unable to talk. But really, who knows what I'll get when son's healing manifests? Will he be utterly sane? Will he be reclusive because he didn't know how to deal with people? Will he be prone to quietness? Will he have a trace of sadness? Will his beauty return? Who knows?

I'm a whack-job, but that's cool. And I can live with who and what I am now..compared to who or what I could have been if life hadn't thrown me some cruelties. (Okay, some male black writers keep wondering when I'm going to write a love story with a black woman and a black man. I kinda doubt I'll ever be sane enough to do that.) But on the whole I'm okay with who I am as opposed to saying "I would've written such lovely precious stories of black love if bad stuff hadn't happened." The me who I am has given the world wind follower. Not too shabby for a story from a cracked pot.

Am in a bit of pain. No sleep for about five days straight. And younger son hitting himself cause he's so frustrated with always being sick. Did do a little good for myself though: dropped all communications with silly people who spout know-it-all platitudes. There definitely is a divide between people with healthy kids and people with sick, dead, dying, or suicided kids. We don't go around saying stupid platitudes about life is yadda yadda and what doesn't kill you make you stronger and what all platitudes these spiritual types throw at you. Finally got sick of going to various network sites and seeing these platitudes being spouted.

Obviously, my soul has issues with this unfair cruelty toward my son, though. But it's good to know where this weird motif came from in my writing. Wonder what else I'll suddenly notice.
Posted by Carole McDonnell at 2:10 PM

It's incredible to discover the roots of the common themes in stories. More than ever I am convinced that it's impossible to write a good story without looking into the depths of the writer's soul. That's part of what makes Windfollower a great story.

Wow. The insight. I am thinking about it. This should be stickied somewhere so that a future analyst of your stories will have a greater understanding.

I don't recall if you ever stated the source of your son's pain? I have recently come down with a trigeminal neuralgia, a totally invisible pain of the jaw and ear. I tap and rub on my face, hoping that if I give the brain real sensations that it will give up on giving me the fake sensations of this is all you can think about pain.

Oh, and I don't remember if I told you that my middle son, the one with Asberger's a little stronger than mine, has ankylosing spondylitis. He is in such severe pain that he could not keep up from his work and was fired from his dream video game programming job. Oh, how your heart breaks for your children.

And off-topic, my husband is going to self-publish one of my trilogies. Since I bought your book, you have to buy one of mine. I'll even send you the money to do it. Okay? LOL.

Hi Lelia. Sorry it took me so long to answer. Life is creeping back into my bones, though. And son is doing better.

I'm so sorry your son lost his dream job. I wish he could do it from home. I'll pray for him. I'm so sorry.

It's a head thing and a tummy thing for son. Kinda stressing.

Of course I'll buy your book. But keep submitting. Did you try parker publishing?

I haven't tried Parker. Would they want someone as white as me? The brown on two of my kids hasn't rubbed off any.

Hmm, the characters are certainly multi-racial.

As long as the main character is African-American or Black, why not?