Lately my friend Terry's been on my mind. Why does that happen? Someone dead for a couple of years -- or longer-- just starts pressing at the mind and one can't shake it. I even included a Terry-like person in my novel Onion. That's the effect he had on me. Or maybe he was always in the back of my mind and decided to jump into Onion. I miss him a lot.

I found no obituary for him on the web except for this:


"Beloved activist and film maker Terry Strecker, known for his affection for people and for all things beautiful as well as his work on films such as "Inside Outside" and "Safer in the Street," passed away on September 29, 2006."


I knew him when we went to Purchase together. He was older than I was and was one of the central figures in a little group that I kinda belonged to. I can't really describe what there was between Terry and me... I hardly know myself. Certainly, I don't think anyone else knew of it. (Yeah, I know... confusing...but it would be even more confusing to describe this relationship. And I don't want to talk too much about it. Especially for folks who don't understand certain things.) 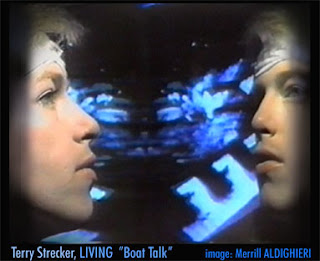 As I said, I knew him in school when we went to college in Purchase. I lost touch with him after he graduated -- which I think was the thing he decided to do. I really am happy I knew him. And I'm happy for the little group of wounded WASP, German, Italian, and Jewish gay and bisexual males I was surrounded with in college. The Christians didn't protect me or include me in. The Blacks didn't protect me or include me in. The Jews and the gays were the ones who took care of me and befriended me. I'm not prone to judging folks. And although I am an avid Bible believer, I didn't allow that to let me judged my friends or destroy my relationships with these guys. I don't think I would've grown up to bash gays if I hadn't met them. But I know hanging around outsiders and being an outsider among outsiders influenced me in wonderful ways. I think of Terry and so many of my friends now dead. He died of liver cancer. 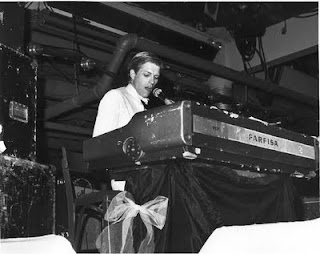 His music was interesting...not that I got it back in the day.


Here's a video they did that played on MTV.


But the greatest mark Terry made was a film he did to help mental hospitals transition the mentally ill from institutional life to the world outside. It's a remarkable achievement and is widely known and used in federal, state, and private governmental mental health sites. Here's the viewer's guide pdf


Here's an abstract of the film:


Inside Outside: Building a Meaningful Life After the Hospital

This is a work of hope created by ex-patient film-makers Pat Deegan and Terry Strecker. Inside Outside tells the story of how eight people with very significant histories of institutionalization made the transition to recovery and community living. In the spirit of the New Freedom Initiative and the Supreme Court’s Olmstead Decision, the film carries the message that recovery and life in the community are possibilities even for people who are viewed as the most chronic or impaired. The film leaves audiences of professionals and people with psychiatric disabilities alike, cheering for these eight individuals as they make their journey from inside institutions to full community inclusion on the outside. Running Time: 49 minutes


The film Inside Outside has completed the federal government’s clearance process. The film has been made available in the public domain which means you can get a copy for free at theSAMHSA website. People outside of the U.S. may not be qualify for a copy of the film through SAMHSA and occasionally copies run out.  An alternative is to purchase a copy at our website.


This is one of the interview he did with a patient.

Rest in Peace, Terry. One day I'll see you in heaven.

Posted by Carole McDonnell at 11:30 AM

Hey. Thanks for remembering Terry. I worked with him. He died of liver cancer. I miss him too. Check out this film we did together:
http://www.patdeegan.com/blog/posts/part-1-politics-memory-video

God bless you with your work.
-Carole

I have no idea who turned me on to his video, but it was only last week. Amazing since I was a prominent Boston dj and announcer through the late 70s to early 90s. But my interest is in the liver cancer, since I just got a transplant last year. I'm betting Terry wasn't a candidate at the time (mine was done at NY Presbyterian, and was fairly experimental). I am very, very sorry for your loss, but I also see that the experience help make you the better person that you are.