Miracle in the Forgotten Land by Setan Lee

Miracle in the Forgotten Land (From the Killing Fields to New Life in Christ)
by Randa Lee, Terry Hill Setan Lee (Author) 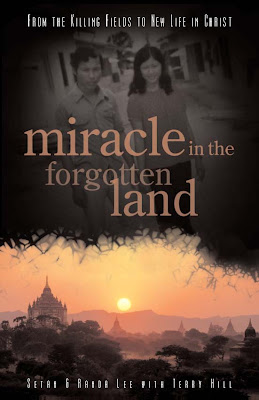 Here is his part of his testimony:

One day his student ID, hidden in a small pocket, was discovered and the Khmer Rouge sentenced him to death along with three other young men. He was blindfolded, heard the screams of his friends as each one was hacked to death. When it came to his turn, Setan cried out to "The Lord of the Universe, Whoever You Are," and a male voice yelled "Stop"!! saying, "We must investigate this man further."

Although Setan was a medical student with no training in agriculture or engineering, he was given a paper and pencil and told to design an irrigation system. Miraculously, the God who saved him, provided the design and these plans are still in use today.

In 1978, the North Vietnamese attacked the Khmer Rouge, capturing Cambodian land, and they eventually invaded the camps where so many hundreds of thousands were in forced labor. The day they invaded Setan's camp, their captors scattered into the jungle to avoid the North Vietnamese, and Setan, seeing the moment to escape, ran also, hiding in a ditch for hours before he made his way through the jungle. For a month as he headed towards Thailand, he avoided land mines by stepping on dead bodies along the way, eating leaves and fruits, and drinking water from hollows in trees. When he heard soldiers approaching, he laid still for hours at a time. One day, not far from the border of Thailand, a strange man appeared, clothing tattered and he seemed barely alive. He spoke to Setan and asked him, "Do you believe in the Lord of the universe?" Setan remembered calling out to the Lord, whoever He was, and answered, "Yes, I do believe in the Lord of the universe." This strange man then said,
"His name is Jesus Christ." Suddenly, the man disappeared. Setan told us he believed that that man was a messenger from God. He said, I had never heard of Christianity, but that day I became a Christian.

They have a newsletter also:
http://www.kampforchrist.org/page.php?page=Newsletter 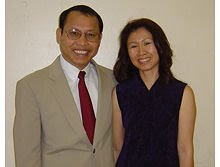 The book about Setan and Randa Lee's story "Miracle in the Forgotten Land" finally become available in some churches' book stores throughout the US, or you can order it by:

* Please add $2 for shipping and handling

Or you can order through email below:
kfcusa@comcast.net
Posted by Carole McDonnell at 12:48 PM