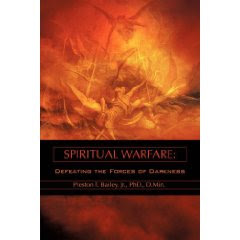 Wow!!! What a book! Definitely one to get if one lives near haunted houses or haunted people!

SPIRITUAL WARFARE: Defeating the Forces of Darkness is a theological and practical book on overcoming the attacks of the Devil. Christians need to use the many spiritual resources that the Lord of Hosts, the Commander in Chief of the heavenly army, has provided for us to defeat the attacks of the Wicked One. Dr. Bailey describes the nine different types of attacks by demons along with how to respond to each type of attack in order to have victory. He also describes Satan's organizational structure of demons and how they scheme to attack people. Dr. Bailey has appeared on numerous television shows and was the producer and host of a weekly series called "The Christian Counselor." He has trained police departments about Satanic Ritual activities and been a consultant with law enforcement on occult related crime. He was appointed by the Governor as Chairman of the Task Force on Child Abuse and later appointed on the Juvenile Anti-crime Task Force that helped reduce juvenile crime in Florida. Since he has many years of experience in dealing with most types of occult and satanic related groups, he has done numerous seminars in churches and Christian organizations on the subject. Dr. Bailey also has counseled thousands of demonized people and hundreds of people who were ritually abused. Since he has led many Satanists, witches, warlocks, and those involved in the occult to Christ, his insight into the occult has helped him train thousands of Christian counselors in Europe, Canada, and throughout the United States and minister to those who have been demonized. God has given him many unique experiences that he has shared in this book which will enrich your life and reveal startling truths about spiritual warfare and how to have victory over the attacks of Satan.

His website is really a great site and you can download documents on how to pray for demonized folks and houses. It's a great site. Check it out.

Here is the amazon site
Posted by Carole McDonnell at 10:12 AM