Well, today is the 3rd day of the fast. I made a deal with God that I'd eat at the conference. So resumed the fast again this morning at 9 am. So will not be eating again until 9 tomorrow morning. Hubby's been foodless for the past 2 days. HE's gonna be going the straight 3 days through. I love him so much.

Didn't sleep last night at all, or the night before. Fasting means...well, fasting from sex too. Which would've maybe given me an hour or so of sleep. But it's what one has to do.

But I've got to tell you about the conference yesterday -- where I allowed myself to eat. It was actually quite good. The minister was Anna Rivera Brown, an older woman and her text was taken from Genesis where Jacob works for seven years for Rachel and when he woke up "behold it was Leah!" She used Leah to represent the stuff we haven't been working for, the stuff that gets dropped into our lives, the stuff we have to deal with if we are to get to our Rachel. She was pretty harsh on Leah and pretty much identified her with bad stuff that happens but I kept remembering a medieval sermon on Leah and Rachel...to the effect: Rachel was beautiful but Lean was more fruitful. So I didn't quite feel the allegory. Plus, you know me. Kneejerk christian anger or disdain toward certain Bible characters (Hagar, Michal, Tamar, Absalom, Woman at the Well, Potiphar's wife, et al just kinda get me into one of my she's-sleepy-so-she's-bitchy-and-ready-for-a-fight snits.)

But the sermon was quite good.

Then folks got up to give testimonies. I gave a testimony on God's goodness to us through Marvel Comics and Iron Man. Don't know if I told this here before but back in the day -- about 27 years ago-- hubby worked for Marvel and worked on the Iron Man comics. This is a picture of hubby all those years ago. We don't take pictures anymore for some reason so I don't have any pictures of us...unless it was taken by school for Gabe or for the back of my book. What can I say? We've fallen away from normalcy in many ways? I truly don't even know how I look. At that time, he did the story on which the 2008 Iron Man movie was based, and he and the writer created the character of Obadiah Stane/Iron Monger -- played by Jeff Bridges in the film. Well, here we are in financial issues cause by my health, kid's health, older son's issues...and out of the blue the Iron Man movie comes out and of all stories to choose they choose that one! (I like to think that God turns all the world around for little old me.) Then Marvel calls us up and tells us we're going to get some money for character creation. Megabucks. Okay so it's not in the millions, probably, but it will help to wipe out ALL our debts. We're supposed to get the money the week of April 1, after the 1st quarter yadda-yadda. So I give a testimony on that, casually mentioning that at present we're only living on half a paycheck because the other half has to go to debts.

Later a lady and her friend came over to me and wrote a check for $100 for me because she felt God was telling her to do it. She didn't put my name in but said I could use it for something nice for myself. Well, the nicest thing I could think of is to pay off the rest of scheduled payment of my electric bill cause they were coming to cut it off this week. Isn't God good?

But even better!! This lady and her friend prayed for Gabe and me. Maybe she saw how wobbly I was during the entire service. I actually was kinda on the verge of keeling over. What a lovely prayer! (The minister also prayed for me but she gave me a word from God: "Once you get this morning, do not get into debt again!" So I'm taking that as a command to obey.) Anyway, this lady, Nancy and her friend Joan (I think) prayed for me. And the absolute weird thing was that they were white middle class women Christians. Honestly, I avoid white middle class women Christians. Almost as much as I avoid black poor women Christians. Basically, I felt God was saying to stop avoiding white Christian women, especially since these women were so loving and caring in their prayer and their generosity. I really have to push past wounds aside and let go of my bitterness. (This will mean telling people off when they anger me instead of nursing a grudge. Will see if I can do it.)

During the conference we got news that one of the older women -- a sweet lady I really like named Quessie-- had heard that her grandson had been shot in Yonkers. So we prayed about that. I'm still praying but really I should call her up and ask how he's doing. Just too scared to find out he's not well. The last time I saw this kid he was around 5. Yeah, I know...and this lady lives in my town and this kid's mom goes out with the son of my neighbor.. . but I told you, I'm a recluse.

Last night my friend Gloria brought over some nice clothes for my Gabe. Nice! Tons of underwear, too. Which this kid needs. On the whole, I don't buy clothes because I never have money to buy them. So my clothes are clothes I've had for 20 years or hand-me-down clothes from my neighbor (who has tons of clothes) or from my friend with the expensive tastes. (Always good to have one of those.) God has really provided. But, it looks as if beginning April 1st -- at least from the email-- I'll at last be out of debt. The Marvel liaison said "megabucks." Am dreaming what exactly megabucks is. From the contract it looks like we'll get at least $25,000. Perhaps more, depending on toys sold, DVD's made, video games. Life is good.

Now, just have to wait for Gabe's healing to manifest. 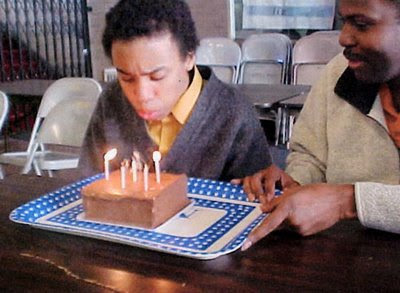 Posted by Carole McDonnell at 8:43 AM

How grand it is to hear of good things coming to your life! Congratulations on the comics thing and blessings upon young Gabriel! I am pleased that those white women prayed for you - sometimes it is the unexpected kindness of the kind of people we fear/dislike that can undo our festering resentments. What a great weight is lifted when that happens! I am thinking of you and keeping you and your family in my prayers. Be well.

Still don't know if I can trust my soul to certain folks but...will at least be less resentful. -C

What wonderful news. I hope you get loads of money. :-) My mom and I had a chance to pray together the other day. We prayed for Gabriel's healing. What a handsome boy he is!

Alas, I just messed up the fast. Got into a depression cause I was trying to diagnose what exactly is wrong with this kid.

Gonna pray for the rest of the day, though. Hubby is still holding on.

Oh CAROLE!!!!! What a wonderful blessing!! Our God is awesome, beautiful, wonderful and faithful! He is our ever-present Help in time of need.

I bet your hubby forgot about those comics, and now, years later here is a wonderful door for God to pour out His provision! Amazing, amazing, amazing! I am so excited for you and your hubby.

I am glad you have enjoyed yourself at the Conference. My 1st thought when you mentioned it was 'ick'... so I am glad I didn't 'voice' it, and I'm glad you didn't listen to my unwritten thoughts, lol. Usually the thing we most feel like going to ends up a 'treasure' of a time.

How about lower class white women? Well, I'm not real low, just not sure I fit the middle class image either LOL...
don't answer that... I know you like me ;)

Hey, just wanted to add... that was good advice about the credit thing, that lady gave you. We were burdened under debt and credit cards for many years. Now, we don't touch it, and have no credit cards. They are a hard task master, and they show no mercy (credit cards). The Lord had us make a deal with Him, not to go there anymore... No cash = no purchase. God is giving you a chance for a clean slate... just my 2c worth because I know living in debt is such a bondage. I am sure you will make the right decisions for you though...

God is so good and so faithful. I love it that he provided for our electric bill. And now.... countdown to cash! YAY!

And YES, no more credit issues. I was amazed when she said to not get in debt again. I kept thinking... "as if." But then, who knows? Maybe I'd be tempted again. So I'm taking your advice in this. In the multitude of counsellors there is wisdom.

And when I have money I'll definitely use it to buy healthy food. No more Chinese food or stuff that will make me sick. That'll be one of the temptations of having regular money.